By Dan Kapper (and Justin Difazzio)

We recently asked our video director, Dan Kapper, to walk us through the process of creating our new 2019 demo reel. Wait! Demo reel, you say? Yes, indeed! Check it out before you see how we did it. We’re pretty proud of all we do here, and this video showcasing what we offer is no exception.

I know. I know. How did we manage to cram so much in? We’re gonna let you in on a little secret. His name is Dan, and he’s pretty amazing.

But really, there aren’t any secrets to how we did this, as you’ll see. It’s all hard work and creative thinking. Take it away, Dan! 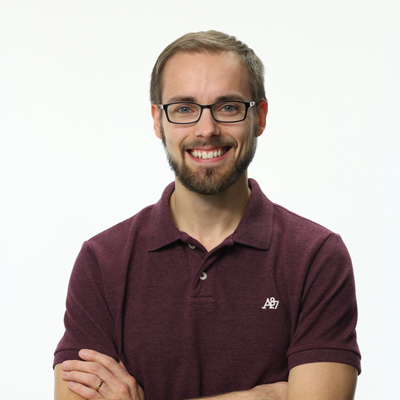 Like any edit, I had to gather the assets I was going to work with. I was given a lot of freedom on this project. Brian Oster, OC’s Creative Director, basically just said, “I want you to make a new demo reel that showcases video, design, and web in one video.” The first step for me was to ask my teammates to tell me what their favorite projects were, so it wouldn’t just be my own taste going into this video. Plus, we do so many jobs that I don’t even know half of the projects that we put out every month. After everyone weighed in on what they liked, I downloaded each of the assets and selected my favorites from their favorites.

For the video footage portion, I inserted all of the clips into a reference timeline or “select reel” and then cut in and out points on clips that I thought looked interesting. I like to keep this select reel around, so if I ever need to go back and find something different or maybe find a different part from the same clip, it’s all in front of me instead of just having each separate clip being kept in a bin in the project panel. 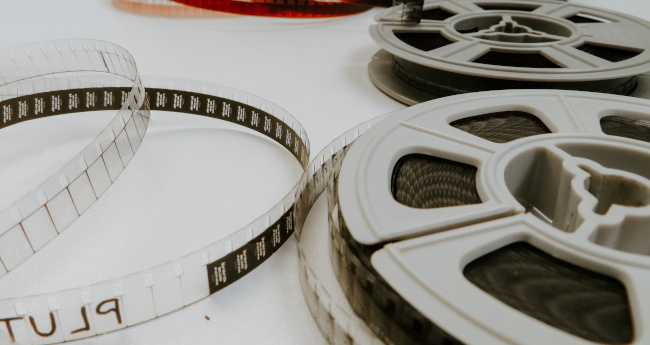 After selecting my favorite clips from over an hour of footage, it was a matter of translating the static web pages and designs and giving those a bit of movement so they would be just as interesting.

I didn’t want the video to turn into a boring slideshow whenever I wasn’t showcasing our video footage. One way I’ve decided to do that in this demo reel is to screen capture a website—take the Genoa Guest House website for example—and then composite that video clip over a photo of a laptop I downloaded from Unsplash. Add a little bit of camera shake to the positioning to make it appear to be footage that was shot handheld. I’ve found that adding a bit of movement keeps it a little more interesting than just seeing the website itself taking up the whole screen.

I used the same type of effect to display graphic design in the video. The Bockman’s vehicle wrap design was what we chose for this. I wanted to show how we take it from the design on the computer to the final application on the van itself. I screen captured the design inside Adobe Illustrator and merged that footage with a still photo of the van with the wrap applied. 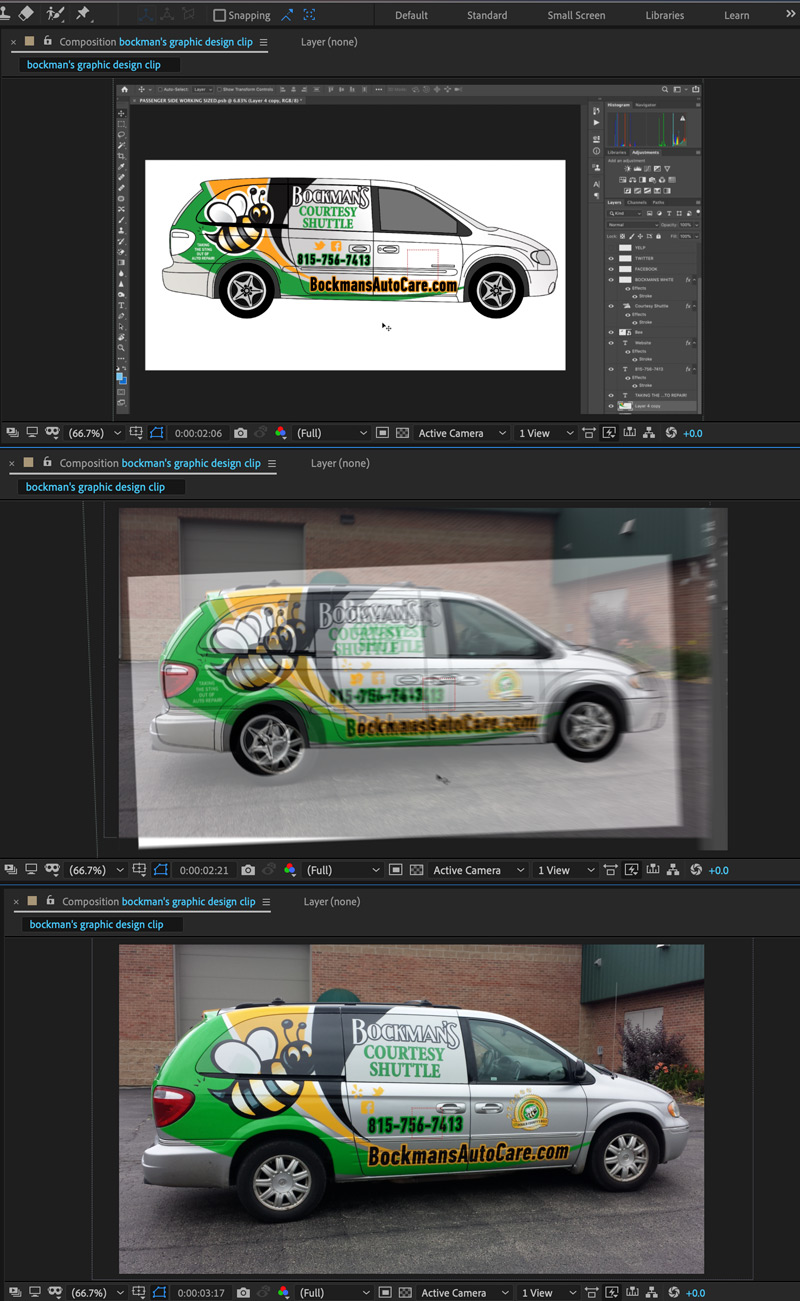 Just seeing imagery alone looks nice, but it can’t sell everything you are capable of producing for the client. That’s where the text comes in. The text is letting the viewer know we can film on location or in a studio. We are the ones creating these designs and websites. To me its self-explanatory, but for a viewer, they may not realize some of these things as the images pass by quickly. Also, text is another way to keep the viewer engaged. It’s really easy to start zoning out on a video without a real story or characters to connect to.

That’s what brings me to my next point: the radio clip at the beginning.

I added the radio shot in the intro later on, after working through a very rough edit and deciding that the video needed something at the beginning to disrupt the viewer’s attention. The radio static gets their attention, and it also goes hand in hand with audio clip theme that I built into the video.

The first audio recording you hear is 1962 audio of astronaut John Glenn observing luminescent particles during earth orbit. He’s talking about a very visual experience, which works great for a demo reel that is all about visuals. Using the line of him describing something that he was seeing would be a great way to connect the viewer with the idea that they, too, can hire OC and have their message seen in a beautiful light. The static that accompanies his voice matches the old-fashioned radio aesthetic that you experience in the intro shot.

See if you can tell who is in the following clips. The speaker is saying that some of the most spectacular pieces of film art are in TV commercials. He’s describing an ad, saying it was “the most brilliant I had ever seen.” Again, he’s hitting on the theme of imagery and visuals.

“Everything OC is making is about telling a story through imagery. It’s not just video, not just design; it’s all of it.”

The final audio clip was from an interview where the speaker is describing what the job of a director of photography is all about. I decided to leave her clip to only say “the ability to tell a story through imagery” because I didn’t want that statement to be about film making alone. I wanted that statement to tell the viewer that everything OC is making is about telling a story through imagery. It’s not just video, not just design; it’s all of it. I would even say that in our writing we are creating imagery in your mind. It’s all imagery.

The splits in the music are another method to keep the viewer interested. This is a pretty standard movie trailer technique. I picked those songs because they all had a fast tempo with a positive vibe to them, which matches the friendly and energetic nature of OC.

And That’s How We Did It!

Nothing to it, right? Well, no. It takes years of experience and a love of the craft to do what Dan has done here, but that doesn’t mean you can’t take to heart some of the steps he took in crafting this quick look at what OC can do for clients. Stay tuned for more tips from the OC team. We’re always innovating and finding ways to accomplish magic in all we do.